MET Police Commissioner Cressida Dick And Priti Patel are both being urged to resign over the police handling of the Sarah Everard tribute held at Clapham Park last night, Saturday, March 13.

It is now understood that Home Secretary Priti Patel has demanded a full report from the Metropolitan Police after its response to the vigil was criticised as “unacceptable” and “deeply disturbing”.

Calling the scenes from last night “very upsetting,” Home Office minister Victoria Atkins said on Sunday that the Home Office has asked for a report from Met police on the violence. She also said police need to “explain” what led to scenes of women being pinned down by officers.

Hundreds of people, mostly women, attended the otherwise peaceful event near where the 33-year-old marketing executive was last seen. However, scuffles unexpectedly broke out at the gathering as officers told the crowd of mourners to go home – at one stage, policemen were seen grabbing hold of several women and leading them away in handcuffs.

According to witnesses, the trouble was caused by police as they moved in to break up the gathering, asking people to leave and making multiple arrests. In an apparent attempt to explain the police’s actions, Assistant Commissioner Helen Ball, who made a statement following the event said: “Hundreds of people were packed tightly together, posing a very real risk of easily transmitting Covid-19.”

As pictures emerged on social media of police forcefully arresting women near to where Sarah was last seen, people across the country were furious and criticised the officers’ actions.

Eastenders’ star Milly Zero has claimed she was “physically pushed and threatened” by police as she attended the vigil. Actress Milly, 21, was among the crowd and documented before and after officers arrived on her social media page.

The star, who has played Dotty Cotton in EastEnders since 2019, shared four photos; one of the streams of flowers that had been laid at the bandstand in Sarah’s memory, and another of the peaceful crowd holding up signs that read: “Women’s rights are human rights.” 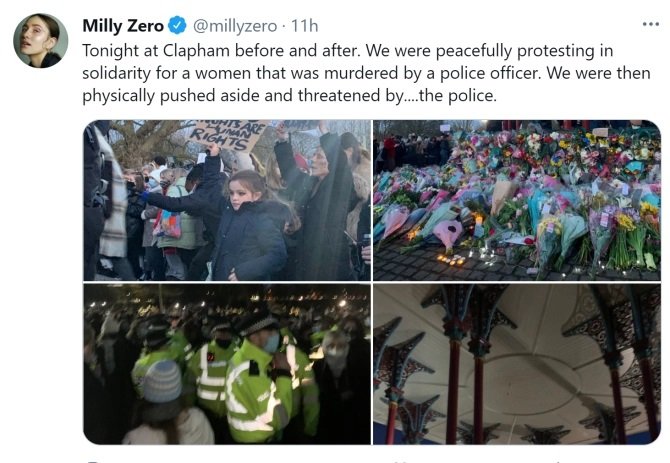 The next two images were full of police storming through the public – and taking over the bandstand. Milly made shocking claims in the post’s accompanying caption, writing: “Tonight at Clapham before and after.

“We were peacefully protesting in solidarity for women that was murdered by a police officer. We were then physically pushed aside and threatened by….the police.”

Mourners shouted “shame on you” at officers as they ripped women off the metal railings, with shocking pictures showing women pinned to the floor as they were arrested and others cuffed as they were led away.

Please check back for updates on this story as responses are expected on Monday, March 15, from both the MET Commissioner and the Home Secretary.

Costa del Sol
A 26-year-old unvaccinated woman is in critical condition after catching Covid while pregnant.An unvaccinated young woman, 26, who contracted Covid has had a caesarean...