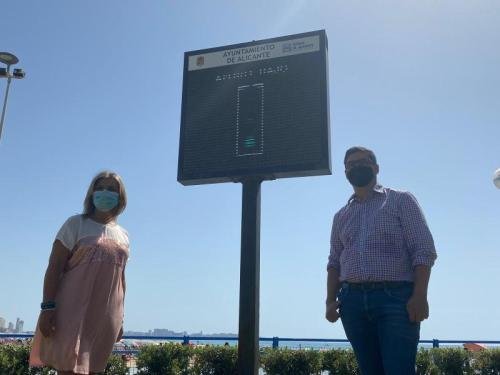 A Costa Blanca council has revealed exact users of a beach in Alicante – in real time, for the first time.

A CAMERA, drafted in by Alicante Tourist Board, has been placed at Postiguet Beach this summer, and the first figures for July and August show more than 135,000 people enjoyed the sun, sea and sand.

Through the Aguas de Alicante ‘artificial vision camera system’, the tourist board has counted 60,578 users in July and 75,726 beachgoers last month.

Councillor for Tourism, Mari Carmen Sánchez, pointed out that “never, until now, have we been able to have exact occupancy figures on the beaches of Alicante in real time”, and has estimated that “being able to count the users of the beaches is a very useful tool, since it will allow us, among other things, a very valuable provision of services and personnel that we did not have until now ”.

She said: “Now is the right time for Alicante, which has the Digital District, to apply the latest technologies and become a national benchmark.”

Sánchez added that the idea is to expand this camera system in the future to other beaches in the city.

“In addition to counting users in real time, the camera system is allowing us to control compliance with the social distancing measures required by the Ministry of Health during this Covid summer,” said Sánchez.

“Thanks to the viewing system, the security forces and the social responsibility of Alicante and visitors, there has been no serious altercation to regret during the summer period. ”

The camera system is designed in such a way that no images are transmitted or stored in any device, complying with the protection of personal data and compliance with European legislation GDPR.

A data capture system processes the concentration of people distributed on the sand with a temporary rhythm of five minutes, allowing the user to know the occupation of the beach, explained the council in a statement.