A patient from the Son Espases hospital in Mallorca left the ICU ward to applause from staff after spending a mind-numbing 159 days in the unit.

Manuel, 64, left the Intensive Care Unit on Tuesday after he had spent 159 days there being treated for COVID-19. He will now carry on with his recovery in the ward, after spending more than five months in the unit. He now holds the ‘grim’ record for the person who has stayed the longest in a critical care unit in Spain. The next patient in this sad ranking, although it’s not a contest!, is Ángel Rodríguez Guzmán, 70, who spent 158 ​​days in the ICU of the Gregorio Marañón hospital in Madrid.

Guzmán had suffered from a previous cardiac pathology and Covid-19 caused bilateral pneumonia, which made him require mechanical ventilation and tracheostomy and deep sedation. His situation became so serious that the family was allowed access to say goodbye to him, but the treatments administered at the hospital managed to maintain a some stability in his condition, which eventually led to his transfer to the general ward. 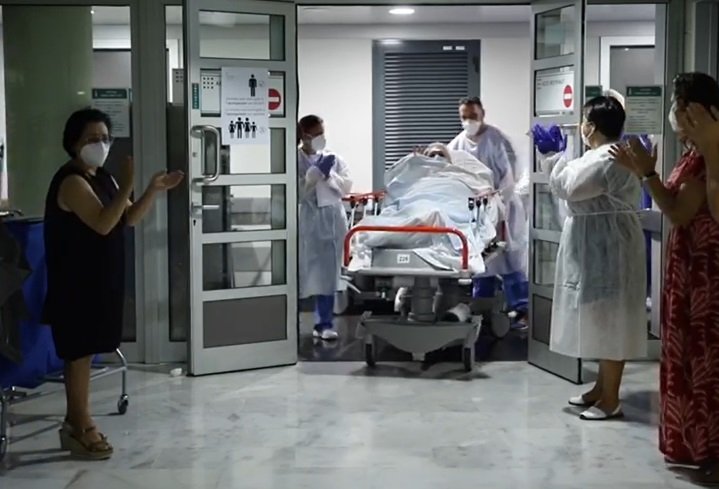 The Son Espases staff warmly applauded Manuel as he was transferred to his new room, he, in turn, made an emotional gesture of satisfaction and blew kisses as he passed, thanking everyone for the care he had received while in the specialist unit.

Manuel’s son, Lolo Salcés, spoke of how it has been for the family, who have also seen their mother admitted for four days and his sister who had to isolated at home. Lolo said his father “has had moments of gravity” and that “We do not know how (the family) were infected, it was in mid-March. Then we did not know so much about the virus.”

He went on to explain, quote: “These five months have been difficult, there have been ups and downs. At this time, he suffered a major blood infection but has started to recover, relatively recently, and the worst is over.”

Lolo explains that at the beginning when his father was first admitted they could only see him once a day through a window. “We have been closer to him thanks also to a person who wore his suit every day, risked his life, so that we could see him for five minutes through a videoconference,”

From this Tuesday, Manuel will carry on receiving care in the main ward. “There is nothing more important to us than taking care of him,” Lola said.

PALMA residents had recently called on the city council to close off beaches at night in the face of the increase in Covid-19 cases on the island.