A SEVILLE scooter crash has resulted in road closures and disruption this week.

Since electric scooters were permitted across Spain a number of years ago there has been a constant battle between their riders and the public.

This week in Sevile, a 58-year-old man was knocked off his scooter in a collision with a car.

Police attended the incident and it is presumed, at this time, that the driver of the scooter ran a red light and drove straight in front of an oncoming car. The accident occurred at 12.30pm on Thursday August 27. 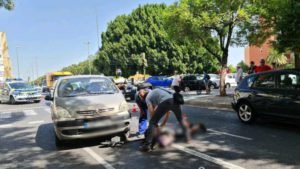 Paramedics were called to the scene, however, despite multiple contusions to the face and head, the scooter driver refused medical assistance.

Upon examination by the Seville police it was discovered that the scooter driver’s blood alcohol level was SEVEN times the allowed legal limit. This would already carry stern penalties however as it resulted in a road traffic accident the penalties are likely to be much more severe.


This week’s Seville scooter crash also resulted in chaos on the roads as detours and restrictions were imposed on the areas until the incident was cleared. 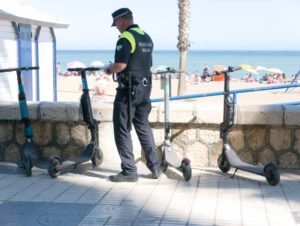 This, often silent, means of transportation has caused regular rifts between their riders and members of the public. Despite the law being changed earlier this year to disallow the devices on pavements they are still commonplace, and their use as such carrying hefty fines, they are still evident on public walkways across the country.

Fine were introduced in 2019 by Spain’s Directorate General of Traffic along with a number of other new classifications and restrictions including:

In one year alone there were 300 accidents involving e-scooters with five of those incidents resulting in a death.

Breaking News – Banksy’s Show me the Monet brings in £7.6million