FIREFIGHTERS are still battling a ferocious wildfire which has ripped through the Sierra Cabrera mountains in popular holiday resort Mojacar on Spain’s Costa Almeria.

The latest update from the Andalucia Infoca wildfire prevention service at around 8.30am says the blaze is stabilised, but remains active, and the efforts to douse the flames continue.

Infoca reported it had been a tough night. Some 150 firefighters worked tirelessly to stop the ‘difficult to fight’ blaze advancing, helicopters and planes rejoining the battle when the light came up.


The fire broke out early Sunday afternoon in the Llanos de Anton area of the Cabrera mountains in Carboneras in an area of steep mountain sides. By the evening the fire had raced through easily burning terrain to Mojacar and on towards Turre, and seven helicopters, five planes and seven groups of forest firefighters were on the job of trying to put it out.

The blaze turned the evening sky in Mojacar a burnt orange, while the smoke could be seen as far away as Aguilas in Murcia. 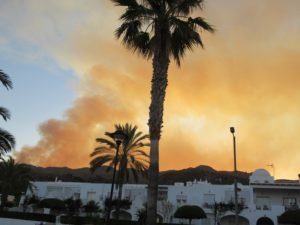