IRON ORE from the Alquife mines in Granada will be unloaded at Malaga port and not Carboneras.

Local mayor Jose Luis Amerigo Fernandez expressed his relief at the reversal of earlier plans to send the iron ore to Carboneras.

“We passed on the local population’s opposition to the proposal in the course of several meetings with the managing director of Minas de Alquife,” Amerigo Fernandez said.

“We made it clear that we would not hesitate to appeal against a regional government authorisation to allow 100,000 tons of iron ore to be unloaded and handled in Carboneras,” he declared.

The decision to unload in Malaga and not Carboneras was clearly influenced by the intense opposition from town hall, residents and collectives belonging to the Muevete por Carboneras (Get moving for Carboneras) platform, Amerigo Fernandez maintained.

At the same time, the mayor warned that should there be another attempt to use Carboneras, the town hall was still on its guard and intended to use every means at its disposal to prevent it. 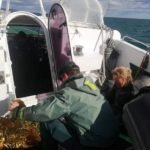