MALAGA city and seven towns in the province will join the list of places which have exceeded the rate of 500 infections per 100,000 inhabitants which is the limit set by the Junta de Andalucía for border confinement.

While it still has to be officially announced and published by the Official Regional Gazette (BOJA), the towns which have been added to the list of those from which you will only be allowed to leave or enter for essential reasons which include caring for a dependant person, health appointments and professional, business or legal obligations are: Malaga, Benalmadena, Rincon de la Victoria, Mijas, Fuengirola, Estepona, Cartama and Marbella.

These restrictions will come into effect at 0.00h of Wednesday (that is, midnight from Tuesday into Wednesday) and will last at least 14 days.

Meanwhile, towns which are in lockdown due to the rate of 1,000 or more infections per 100,000 inhabitants, have also added another seven names to the list, which are Farajan, Moclinejo, Alora, Cañete la Real, Alcaucin, Velez-Malaga and Alfarnate.


These towns not only have border confinement, but all but essential businesses must remain closed.

The full list of towns with border confinement from 0.00h of Wednesday will be:

The full list of towns with border confinement AND lockdown and closure of all non-essential businesses as of 0.00h of Wednesday will be: 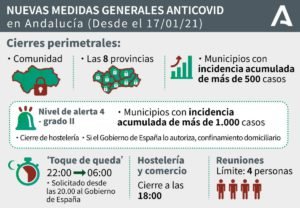