Four men have been arrested on the Costa del Sol on suspicion of kidnap after two men were allegedly held against their will, beaten and threatened with ‘mutilation’ if a ransom was not paid.

According to the Guardia Civil, the four suspects, all Moroccan and aged 25 to 35, bundled the 25-year-old victims into a car on the A7 in Alicante on September 30.

They then drove to the Costa del Sol before sending ransom demands of €150,000 to the families of both Moroccan captives.

The alarm was raised in Alicante by the sister of one of the men being held after she was told her brother would be killed if the ransom was not paid.

The family of the second victim had already paid the ransom and chose not to contact the police. 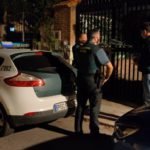 Investigations by Alicante and Malaga police led them to a “single-family” home in Fuengirola and after “police pressure” the two men were released after “being captive for several days” and the four captors arrested.