The device was working until the hornet went into a forest. The female Asian giant hornet was caught last week and was fed strawberry jam, once the tracking device was attached, she was let out two days later, the hornets are given the name ‘murder hornet’.

Last year was the first time the hornets were seen, and 18 have been found since. Entomologists have tried attaching a radio to the hornet; however, the glue didn’t dry in time and fell off of the hornet. These ‘murder hornets’ can be life-threatening; their stings are immensely powerful. The hornets kill around a 30-40 people a year in Asia, and it could be less.

The largest ‘murder hornet’ is 2-inches and the insects can kill small rodents like mice. They are detrimental to honey bees, as they pollinate crops. Farmers in the certain areas of the US depend on honey bees, and the ‘murder hornets’ attack the honeybee hives. 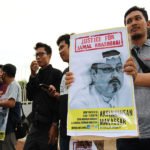 News
French authorities have confirmed that a man arrested over Khashoggi murder, was released after having 48 hours to verify his identity. The Saudi authorities...