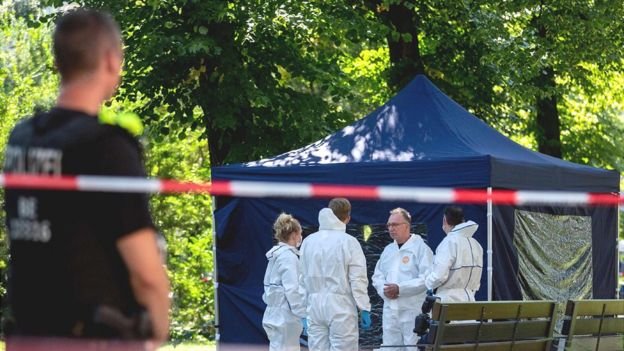 Accusations from Germany, alleging that Russia ordered the murder of a man killed in a Berlin park last August.

A RUSSIAN national identified as Vadim K has been charged with the murder.

Previously Russia had called accusations it was involved in the crime “absolutely groundless.”

Zelimkhan Khangoshvili – who lived for a time under the name Tornike Kavtarashvili – was shot dead in broad daylight last August in Berlin’s Kleiner Tiergarten park. The 40-year-old Georgian national was a former Chechen rebel commander.

Media have compared the attack on Khangoshvili to the attempted murder of Russian former intelligence agent Sergei Skripal and his daughter in the UK in 2018.

It is alleged that in August 2019 the defendant flew from Moscow to Paris and from there to Berlin via Warsaw, using a passport under the name Vadim S issued by Russian authorities just a month previously.


On August 23 he allegedly came up behind Khangoshvili on a bicycle and fired a shot into his torso using a silenced pistol. Prosecutors say he then fired two more shots into the victim’s head as he lay on the ground, killing him instantly.

Vadim K was arrested shortly afterwards and has been in pre-trial detention since.


The victim Tornike K was a Georgian citizen of Chechen descent and had been an asylum seeker in Germany since 2016, He had fought against Russia as the leader of a Chechen militia between 2000 and 2004.

It’s also reported that Russian authorities classified Tornike K as a terrorist and accused him of being a member of the terrorist association ‘Caucasian Emirate.’