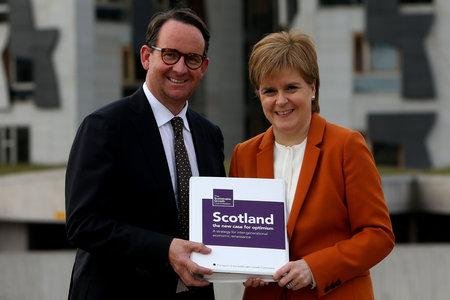 Nicola Sturgeon’s most trusted economist has predicted Scotland will have the worst performing economy in the developed world as a result of the coronavirus pandemic.

ANDREW WILSON, the former SNP MSP who authored the party’s Growth Commission on independence, said the outlook for families was “bleak”.

He predicted the looming recession would be long-lasting and said a “monumental effort” was required from governments working in collaboration to address it.

Mr Wilson was speaking on BBC Radio Scotland ahead of today’s release of the Scottish GDP figures for the first quarter of 2020, which includes the start of the lockdown.

He said he expected the figures to be “difficult,” but preliminary, not definitive.

He said: “What’s clear to me is the UK is set to be the worst-performing economy in the developed world and Scotland’s probably going to be a bit worse because of the nature of our sectors and how the virus has behaved north and south of the border.”

Figures from the Office for National Statistics yesterday showed Scotland’s unemployment rate rising 1.1 per cent to 4.6 per cent in the last quarter, overtaking the UK rate of 3.9 per cent.

Mr Wilson has also warned of the impact on business of keeping the 2m rule on physical distancing.

However the First Minister has so far resisted calls to reduce it to 1m, arguing it is not yet safe to do so.