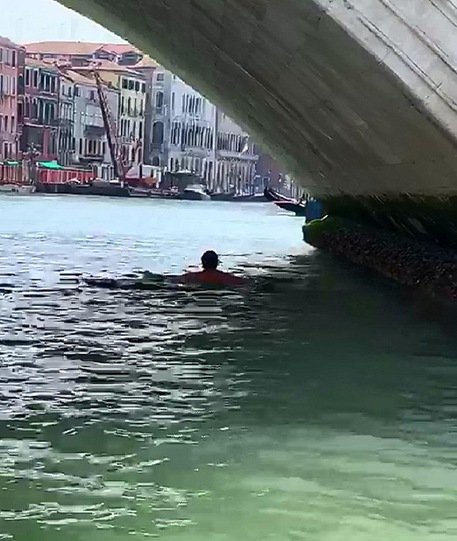 THE two German tourists who decided to have an illegal swim in Venice’s Grand Canal on Wednesday have now been fined, local media reports.

The tourists were filmed swimming under the famed Rialto Bridge as their family looked on.

They were caught on camera by Augusto Maurandi, who filmed the two from his boat. In the video now shared to social media, Maurandi can be heard telling the tourists, “Swimming in the canal is totally banned.”

The men brush off the comment, climb out the water, and begin posing for the camera.

An army patrol reportedly then caught the two tourists after their dip, still in swimming shorts and barefoot. Initial reports suggested that the tourists dodged a fine because they weren’t actually witnessed in the water by the officers.

It has now emerged, however, that the tourists will each be fined €450 for the stunt.

Italy opened its borders to some EU states and Britain on June 3, and Venice has already seen an influx of tourists.

Yesterday, Venice was hit by a rare high tide, which does not usually occur in June, and tourists were filmed frolicking in a flooded St Mark’s Square.