The small and pretty village of 1300 inhabitants called Celleno, located in the green province of Viterbo an hour’s drive from Rome, is the first Italian community to launch guided online live tours of the historic village, its castle and its traditions. A series of live broadcasts on Facebook, conducted by local expert and architect Alessandra Rocchi in the English language, who will show the hidden gem that includes the suggestive medieval village, nature and traditional food in a timeless context. The first live event will be on Wednesday 3th June 2020 at 5:00 PM (local time) on the official page of the Municipality of Celleno: https://www.facebook.com/ilborgofantasma .

Over the past few years, the small town has been increasingly discovered by Italian and international tourists who have been enchanted by the abandoned village.
The small Italian town was violently attacked by the coronavirus due to the infection of a nursing home. For two weeks the village, in addition to national quarantine measures, the local health system closed the village in a “red zone”. The inhabitants of the municipality, including a university professor, local experts and entrepreneurs, started live broadcasts on Facebook to restart tourism and let everyone know about the cultural and landscape beauties of the municipality. 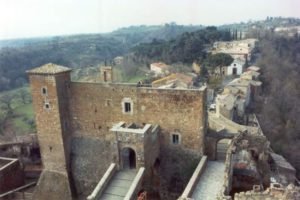 The village opens the beauty of its historic centre to the world, pending the opening of the borders of Italy and the European Community which will take place in the coming days.

“There is a rediscovery of the small historic Italian villages which are real treasures throughout Italy: each one has its own great history, beauty and traditions. Our idea is to give viewers all over the world a ‘taste’ of our heritage, welcoming them to our medieval village, for the moment thanks to the web. The best thing will be to welcome visitors personally in the next few days and following months ” comments the mayor of Celleno Marco Bianchi.

Celleno, also known as ‘The ghost village’ is named after its similarity to the nearby Civita di Bagnoregio and because the village, located on a tuff cliff, was abandoned after violent earthquakes in the past. The pretty town, known for its Orsini Castle and the ancient village, with a history that goes from the Etruscans to the Romans and the Middle Ages, it was named by the British newspaper Telegraph among the 25 most beautiful ghost villages in Italy lost in time, it was the film location of the recently released film on Netflix “Black Moon” and it was introduced in the FAI itineraries. More and more international VIPs have been attracted by Celleno, such as Paolo Sorrentivo who visited the small village looking for the right location for his next movie.


In the Orsini Castle the master Enrico Castellani, an internationally renowned artist, lived for over 40 years, where he developed his main works exhibited all over the world and valued at several million euros each. The artist died in Celleno a couple of years ago. Every year the cherry festival is organized with the competition of the spit of the cherry kernel and the cherry tart which is getting longer every year, trying to break the record at the cherry festival.
Celleno appeared in the main Italian media in recent months because the mayor had invited Jennifer Lopez to move to the small village: the well-known star in an interview with Vanity Fair USA had expressed the desire to move one day to a small village in Italy to live a more relaxing life.