Emergency services in Benidorm on Spain’s Costa Blanca have been praised for their ‘excellent teamwork’ after rescuing a mountain hiker who was injured in a fall in tricky terrain.

ALL emergency resources were mobilised yesterday around 8.45pm when a fellow walker made a distress call from the rural area of the Marxassos Partida Marxassos in Benidorm.

The woman had fallen and fractured the tibia of one leg, confirmed Benidorm firefighters.

A Benidorm firefighter source said: “Due to the orography, firefighters took advantage of their off-terrain vehicles and accessed several rural roads until they reached about 500 meters away from the person.” 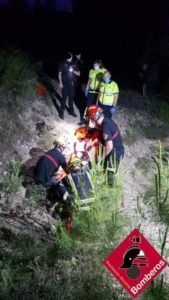 Equipped with a special stretcher for rescue in high mountains, they made their way on foot to the injured hiker where the medical team applied a vacuum splint to the fractured leg, before firefighters and police took over, getting the wounded woman to a fire engine. 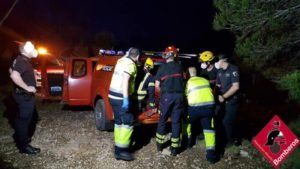 She was then taken to the ambulance waiting below and transferred to the Comarcal Hospital in Villajoyosa.