Marbella City Council will carry out rapid tests to detect possible cases of coronavirus among retail workers providing services during the state of emergency.

The tests, acquired through the Spanish Ministry of Health, will begin to be carried out on employees of pharmacies and municipal markets at the end of next week, most probably from Thursday. 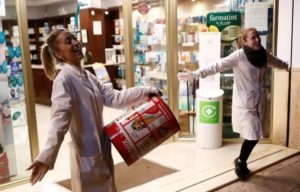 “The tests are a very useful tool to know where they can or could have been sources of contagion to act in these environments. Knowing whether or not there has been contact with the disease is a tool that we have to count on. It is essential to prevent the spread and learn about the situation we have experienced in Marbella, “said the mayor, Ángeles Muñoz yesterday.

The City Council will ask employees and managers of retail businesses to sign a responsible declaration letter. This will create a record of anyone working – and having contact with – other workers and members of the public. The declaration will authorise the City Council to transfer the results of the tests to the Epidemiology and Prevention Service in hospitals and primary care services.

So far, rapid tests have been carried out on workers of the five nursing homes in the municipality and of the Aspandem social group, with nearly 200 tests carried out on home care workers also. Officers of the National Police and Civil Guard stationed in Marbella were also tested recently.


A total of 98.4 per cent of the rapid tests to detect possible cases of coronavirus in the nursing homes of the municipality and that of Aspandem were negative. The rest were cases that had already passed the disease and could not spread it or were negative in more specific tests that were performed later.

The mayor of Marbella also asked companies that have the financial resources, such as institutions or large supermarket chains, to buy the rapid tests themselves and test their own employees to speed up the process.