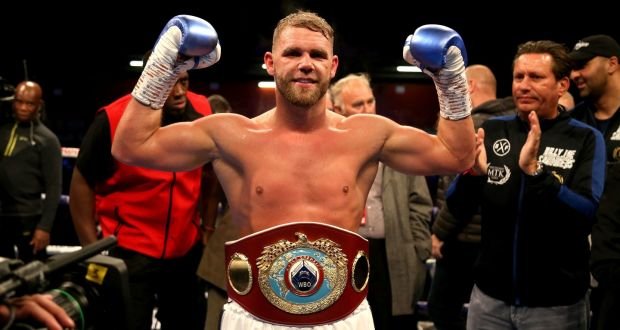 BRITISH boxer Billy Joe Saunders, 30, lands himself in serious trouble once again, as he shares a vile video via WhatsApp, teaching men how to assault their partners during lockdown. The video features WBO super-middleweight Saunders, dressed in a blue hoodie, standing next to a punch bag. He goes on to demonstrate a straight right hand, followed by a left hook. He accompanied the punches by saying, “I just wanted to make a little video for all you dads, husbands, if you’ve got girlfriends etc. Obviously this Covid-19 is getting very serious and we are isolated away.” The shamed fighter went on to say, “If your old woman is giving you mouth and you try to be patient, you try to be calm, cool, but after the sixth day you’re about to explode. All of a sudden she’s coming at you, spitting a bit of venom in your face, ready to say something. You may have left the dishes out, I don’t know what you’ve done, but you’ve upset her. As she comes in, she’s coming at you and you’ve lost it, just keep it safe with the hands. So as she comes in, she’s just about to say something, all of a sudden you explode and hit her on the chin.”

He continued to offer advice that would soon land him in extremely hot water, stating: “At this time she may flash and see white and think, ‘What’s happened?’, she’s in a state of a horror. She doesn’t know what’s going on and all of a sudden you dip down on that knee and you finish her off. That should do the trick.”

Naturally a severe online backlash ensued. One wrote: “He is an absolute disgrace. Continuously painting boxing, the sport I love, in a bad light. We don’t need characters like Billy Joe in the sport, he’ll never learn and has so many chances.”

While another called for strong action: “I hope Billy Joe Saunders loses his licence for that video. Utter trash. No place in society at all.”

Shamed Billy Joe, later issued a grovelling apology via Twitter – “I would never condone domestic violence and if I saw a man touch a woman I would smash him to pieces myself I have a daughter and if a man laid a finger on her it would not end well. Apologies if I offended any women stay blessed x.”


In very recent times, Saunders found himself in further bother. He recently had his trainer Ben Davison and stable-mate Josh Taylor kicked off a plane after calling Delta Airlines with a coronavirus warning. An audio clip surfaced which appeared to reveal him laughing as he recalled ringing Delta Airlines to tell them a friend of his had Covid-19 and was preparing to board the flight.