NOTICES have been distributed today to dog walkers informing them only 100 metres is allowed.

If offenders are caught for dog walking they will be fined on the spot or arrested if further away from their home. In the event of arrest the police have warned the dog will be taken to the dog pound.

Ian Platt called the Euro Weekly News this morning to inform of the latest notice as he walked his dog and was apprehended by the police:

“I’ve got to walk Jack three times a day, but this morning I was stopped by the police and handed the notice and given a warning as I was about 300 metres from my home, the officer told me if I get caught again, I will be fined, and if I repeat the offence I will be arrested on the spot and Jack will be taken away from me and taken to the dog pound.

“Jack can do 100 metres in about 10 seconds, he’s quicker than Linford Christie,” he laughed.


“Seriously though everyone needs to be aware of the new regulations and they are coming down heavy on offenders and I can’t bear the thought of someone having their dog taken away especially at these critical times,” he said.

Dog walking distances have been more relaxed in other areas of Spain, but it’s likely to be enforced in other regions taking Benidorm’s example. 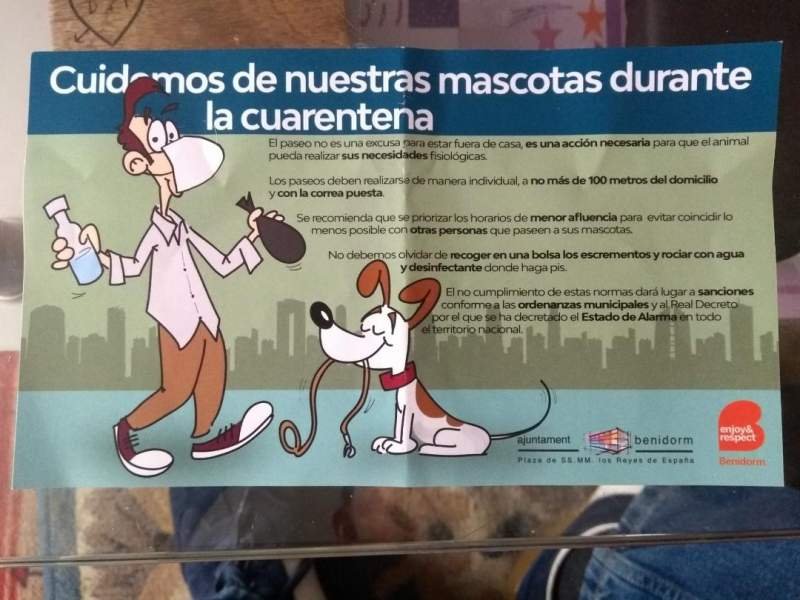 From toilet paper to beer. How has the Spanish shopping basket been affected by the Coronavirus pandemic?