STAFF of Mojacar venue Maui gathered at the local Town Hall on Tuesday to protest about what they claim is the “unfair and arbitrary” decision of the council to close the popular beachside establishment.

The local authority sealed Maui’s doors last month following a council resolution and the administration’s notification in January of the imposition of a €20,000 fine on the company behind Maui and stating that the establishment should not open for a period of 24 months due to a “serious violation” of the law on Public Spaces and Leisure Activities in Andalucia. 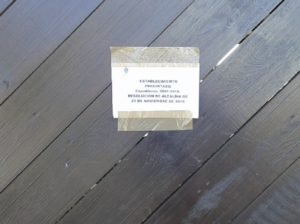 The council maintains the venue was operating as a music bar without the right kind of licences.

The establishment’s legal representatives have reportedly lodged a contentious-administrative appeal with the Almeria courts to get the venue’s doors unsealed.