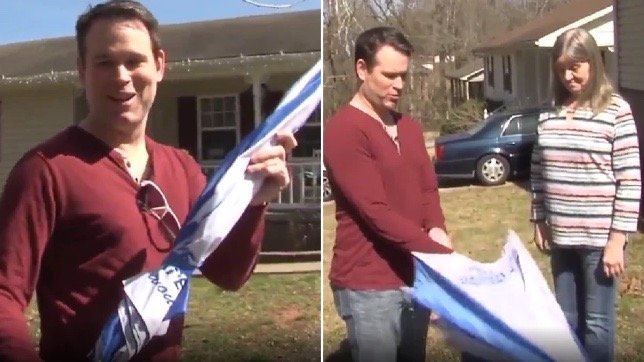 A TV station raised eyebrows after its chief meteorologist surprised a woman who’d lost her sister and home with one of its branded umbrellas. ABC13 in Halifax County, Virginia, sprung the surprise on the woman named Mary on March 1, a week after her sister Carrie Williams, 69, was killed in a crash. Williams died the same night Mary’s home of 40 years burned down. Mary raised all five of her children there, and had been in the house with her granddaughter when it caught fire.

Both survived unharmed, with Mary’s insurance company now investigating the cause of the inferno. Introducing the story, which has since been deleted from the ABC13 website, chief meteorologist George Flickinger said: ‘Somebody is about to get an ABC13 Umbrella who’s been going through a tough time recently so, we’re gonna go meet Mary.’

The segment then switched to Flickinger holding the umbrella above Mary during sunny weather as she tearfully outlined the double-tragedy that had befallen her. Mary said: ‘It was rough to see my home burning up and then apparently that night my sister had passed away on her way to my house.’

Flickinger signed the umbrella for Mary with a note saying he hoped it would help bring her ‘sunshine on a rainy day.’ The meteorologist was then filmed opening the umbrella before it worked, before telling Mary to ‘twirl the umbrella’ as a camera crew filmed.

ABC13 explained that Mary’s daughter Kathy Long had contacted them to say a prized umbrella bearing their brand had been lost in the fire. She said having it replaced had brought her mother a moment of peace. And while many commended ABC13 for their act of kindness, others questioned whether the umbrella could have been handed over in private.


Broadcaster Wes Blankenship was blocked by the station’s Twitter account after he tweeted: ‘@ABC13News is serving its community, one ABC13 umbrella at a time.’