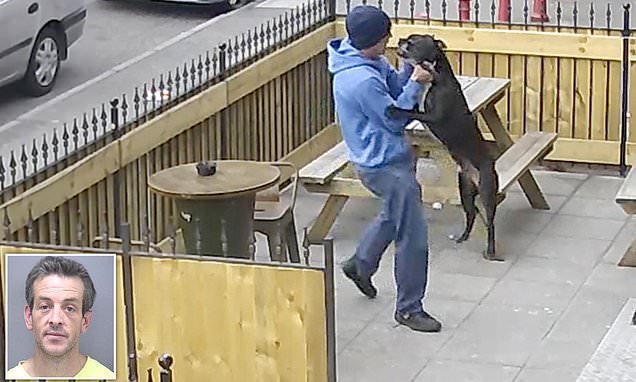 A man was caught on camera punching a dog in the face and slamming it into a fence outside a pub.

Jamie Hill, 40, from Bournemouth, Dorset, was charged with causing unnecessary suffering to a protected animal and was ordered to appear in court.

The animal abuser failed to appear at the planned hearing, resulting in Dorset Police issuing a warrant for his arrest.

CCTV images show the dog entering the beer garden at the Buffalo Bar in Bournemouth and then entering the pub, in April 2019.

The dog later reappears outside and makes it’s way around the patio. A man wearing a blue jumper, believed to be Jamie Hill, grabs the animal and slams it into the fence before unleashing three punches to the dog.

He then grabs the dog by the neck and walks off as by standers look on in horror.

PC Emily Watkins, of Bournemouth police, said: “We have carried out numerous enquiries to locate Jamie Hill but these have so far been unsuccessful.

“I am urging anyone with information as to his whereabouts, or who sees a man matching the description given, to please contact us.

“While we have no information to suggest that he presents a direct risk to the public, I would urge anyone who sees this man not to approach him but to immediately contact Dorset Police on 999.”