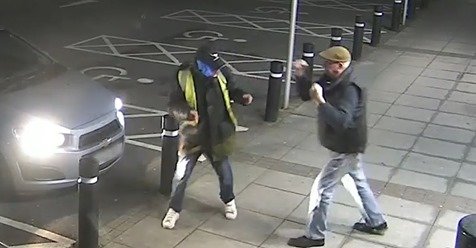 Footage has emerged showing a 77-year-old man fighting off a man who attempted to steal his cash from an ATM in Cardiff.

South Wales Police have released the CCTV footage which shows the incident unfolding. The pensioner was withdrawing cash from a Sainsbury’s on Colchester Avenue, Cardiff, when he was approached by a white male wearing a cap and Hi-Vis jacket.

The pensioner can be seen to bravely refuse to submit to the suspect, as the pair begin to grapple outside the store.

The suspect was forced to retreat empty handed.

The incident took place on February 5 at 6am.

Police have stated that the CCTV shows the suspect walking off into the car park – however, the van seen in the footage is not connected to the suspect.

Detective Constable Stephen Mayne said: “The victim in this case showed great bravery, however he has been left shaken.

“We would encourage anyone who knows him to please come forward.”