The beaches this morning in Spain’s Fuengirola are littered with dead fish both on the beach and in the water under mysterious circumstances. 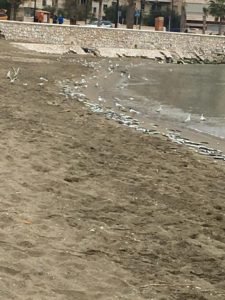 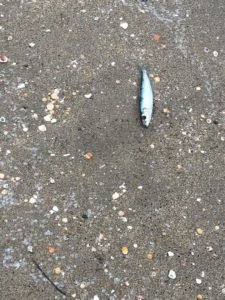 Thousands of dead fish are floating in the water and strewn across the beach with a warning going out from culinary experts not to be tempted to collect and take the fish home for consumption.

Local fisherman are currently scratching their heads to the loss of so many fish in one go as  literally thousands float in the sea.

Miguel Lopez told our reporter ” This is very strange, sometimes fish can get caught on a sandbank and stranded but in 30 years I’ve never seen this amount,I can’t figure it out, unless there is contamination in the sea?”

Meanwhile Paul Gregory who was out walking his dog said” I’ve taken plenty of photos and will send them to the town hall for environmental study and inspection although I think it could have been a large lightning strike to the water that has fried and killed the fish, but I am no expert on these matters”

The mystery continues as beach workers start to clear up literally thousands of dead fish into plastic full bags, although it’s not an easy job, already 4 workers have been attacked by large seagulls who have set their eyes on a large feast!