the art of publishing
More
Home News Spain Spain Will See British Warships Sail Through It’s Waters As They Are...

Spain will see British warships head through its waters shortly as the British Government have deployed 2 warships to protect vessels in the gulf as the crisis deepens.

HMS Montrose and HMS Defender are en route to the Gulf after the order was received from military chiefs, the route they will take is a refuelling and supplies stop at Gibraltar before entering Spanish waters passing up through the Med at full power passing both the Costa del Sol and Costa Blanca before heading to the war zone.

We the Euro Weekly News spoke to a Fleet Chief ranking officer onboard one of the warships although for classified reasons we have to withhold his name. Whilst the exact location of the ships can not be identified he confirmed that the ships will pass through Spanish waters after a quick stop at Gibraltar.

He told us ” Sailors on board are in high spirit  as we head to the Gulf, our deployment is a protective one of British ships passing through the Gulf straits, it’s not the first time we have been out there although this time it could be more hostile, we are armed and ready for whatever action is required”

Meanwhile we spoke to former Chief Petty Officer Jimmy Quinn who served on HMS Invincible in the Falklands war who is watching the crisis unfold with great interest, Quinn who now resides in Spain since retirement to us ” This is why Gib is so important to Britain. When we went to war is was the point of not only refuelling and replenishing but loading up our armoury, the lads on board will be the most selected highly trained, yes naturally nerves will be in the bellies but they will be very prepared, the ships Captains will deploy many training routines as the ships head to the Gulf and do a daily routine of at least a practice for attack once a day, mixed up with social events like football and hockey matches  on deck to keep spirits up”


” We should see the ships sail past in the next few hours or days along the Spanish coast, although the App ship tracker won’t pick them up for exact location as it will be classified, it’s just a case of watching out” Quinn said.

” As they will stop at Gib, as they cruise through the Med they shouldn’t be too far out and visible if they pass through in daylight” he advised. 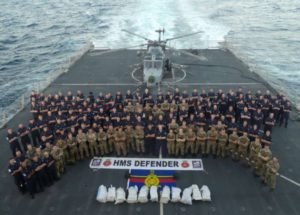 The Benalmadena Community needs you!