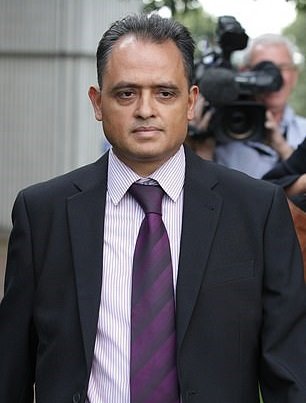 A GP was today found guilty of sexually assaulting six female patients after citing the cases of Angelina Jolie and Jade Goody to justify unnecessary breast and vaginal examinations – bringing his total number of victims to 23. Dr Manish Shah preyed on cancer concerns to persuade patients as young as 11 to undergo intimate examinations for his own sexual gratification, the Old Bailey heard.

Over five years, between May 2009 and June 2013, the 50-year-old assaulted six patients of the Mawney Medical Centre, St Edwards Way, Romford. Shah, from Romford in east London, had blamed the NHS for its ‘flawed’ screening process and said he conducted the exams because he was consumed by guilt after his mother-in-law died of undiagnosed breast cancer. But following an Old Bailey trial, he was found guilty of 25 sexual offences against the six victims, including sexual assault and assault by penetration. The jury was told Shah has already been convicted of similar allegations relating to 17 other women, bringing the total number to 23.

Shah played on the women’s fear of Cancer

Prosecutor Kate Bex QC told jurors that Shah played on the women’s fear of cancer to consent to examinations, but without being properly informed. Some of the victims were particularly vulnerable because of their young age or because of their family history of the disease. MS Bex said: ‘Fear is an incredible motivator and few health concerns are scarier than cancer. Dr Shah exploited that and used it for his own personal gratification.’

Shah brought up the news story about Hollywood star Jolie having a preventative mastectomy as he asked a woman if she would like him to examine her breasts. He also mentioned Goody to another woman, saying an examination was in her best interests, it was claimed. He would give patients hugs and kisses, singling some out as ‘special’ and his ‘star’, saying he had a soft spot for them. He would not always wear gloves and left one patient entirely naked on an examination table, jurors heard. He flouted NHS guidelines on giving healthy women under 25 smear tests and routine breast examinations on women under 50, which were said to cause more harm than good, Ms Bex told jurors.

He also breached guidelines on the use of chaperones during intimate examinations. Shah sexually assaulted one 14-year-old girl behind a curtain as her father sat in the same room. He told young women they were ‘pretty and beautiful’ and remarked how one was ‘tanned down there around the bikini line’. One said he had a visible erection during an examinations’ while others told how he would rest an elbow on their knee and chat away as they lay naked from the waist down with their legs spread.He took longer than was necessary to wipe another patients vagina during a test and was ‘very smiley and overly happy in an unprofessional way, as if he was getting pleasure from the examination’. Another patient received a number of phone calls from a blocked number – and it turned out to be Shah.

Shah denied wrongdoing and his barrister Zoe Johnson QC told jurors he was a ‘cautious, insecure, perhaps at times incompetent GP’. The fact of Shah’s previous conviction did not necessarily make for a case of ‘once a sex offender always a sex offender’, Ms Johnson argued. But prosecutor Ms Bex said: ‘He took advantage of his position as a doctor to persuade women to have breast examinations, internal vaginal examinations, and on occasion even rectal examinations when there was no medical need for them to be done.

Shah told his patients these examinations were necessary

‘He told his patients these examinations were necessary for their health but in fact he was doing it for his own sexual gratification. ‘The convictions relate to regular vaginal, rectal and breast examinations. ‘Shah completed his training in 1997 and became popular after earning a reputation for being ‘the kind of doctor who took time out to see his patients for more than the allotted ten minutes. ‘He would tell patients he had international experience in dealing with contraceptive and sexual health matters just because he was a student in Texas for a month. He will be sentenced on January 7, 2020.

News
Corrupt Guardia Civil suspended without pay by The Directorate General. The officers were arrested in an operation carried out by the Guardia Civil in...

The Queen spends her 74th wedding anniversary without the Prince

News
The Queen has poignantly reached her first wedding anniversary without her late husband, Prince Philip, the Duke of Edinburgh. Seven months without her Prince The difficult milestone, seven...