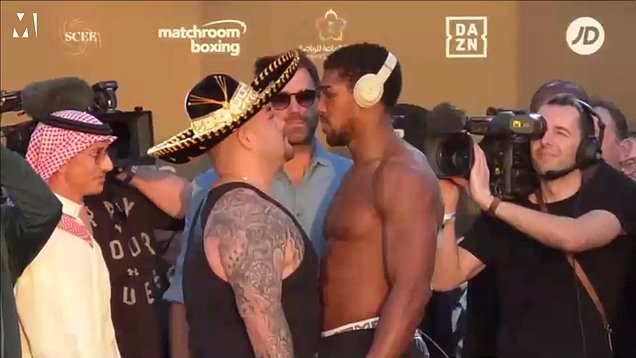 Anthony Joshua must face his demons tonight he will have to take a punch, throw back without hesitation and he might even have to climb off the floor to reclaim the gold and the glory that he maintains is still his.

was never part of the AJ masterplan but here we are, the first world heavyweight championship fight in the Middle East is just hours away, with Joshua reduced to challenger against the only man to have beaten him, Andy Ruiz Jr. It is Joshua’s aura and how he will be remembered that is truly at stake in this compelling examination of boxing’s poster boy.

It was never part of the Aj plan to world domination but after losing his first professional fight here we arena the first world heavyweight championship fight in the Middle East is just hours away, with Joshua now the  challenger against the only man to have beaten him, Andy Ruiz Jr.
A Joshua loss tonight will see him diminish in the boxing ranks and probably doubtful he would get another world title shot with a lot of competition out there.
Boxing fans want to see him fight Marbella Costa del Sol training camp based Tyson Fury but a loss tonight will end any such fight as Fury seems to be on the path to further glory.
Since his first defeat AJ quietly has emerged after weeks of sleepless nights and soul searching.
This is not the over-confident champion who let his challenger touch the belts at a pre-fight meeting last time, before Ruiz Jr battered him around the ring and to the floor before he went home with AJ’s belts.
AJ is looking lean and mean at and the weigh in looked to have been seriously training and looking the lightest ever being 3 stone lighter than his opponent but only time will tell now if it was the right tactics.
By midnight tonight or maybe earlier we will know.
The Euro Weekly News spoke to Dan Hughes boxing trainer who assisted Steve Robinson to beat the odds and become a world champion.
Dan said ” Well it’s make or break for AJ but personally I think round 4 will see an AJ knockout – Ruiz has made his money and AJ will have the bigger heart but the chin he needs to keep out the way because it’s not as strong as he thought it was – AJ will now have the advantage of knowing how to take Ruiz on and should deliver – round 4 you watch!”