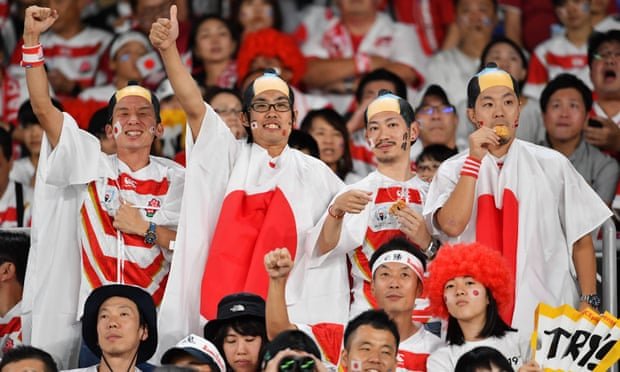 Every face had all the neutral expression of 30 men in a queue for airport check-in, as they were greeted with noise, music, drums and expectations from both sets of fans.

But first, there was rightfully a minutes silence to remember those lost in the typhoon that hit Japan this week.

Ref Ben O’Keefe gave a loud blast and Japan take a short grubber kick-off that Scotland knocked on. Japan were straight on the attack, but Allan Dell got over the ball in the ruck that won his side a penalty.

Stuart Hogg, with his freshly shaven pate, launched a penalty into touch and Scotland had another attacking lineout on the Japan 10m line. It was won cleanly at the tail and Bradbury got his first powerful carry in. It worked left then back inside for Russell to very nearly find Graham with a raking cross-kick, but Japan snaffled it only to lose it again and put Scotland back on the attack on the 5m.

Finn Russell came on the in-to-out angle around the ruck and went over. Laidlaw adds the extras giving Scotland a 0-7 lead against the hosts.


Japan went straight back on the attack, and we must not forget they went behind early vs Ireland and didn’t panic.

Scotland knocked it on just inside their own half for the first scrum of the game.

Japan were on the attack 15 minutes in around halfway and they were getting their familiar recycling rhythm going, and in his attempt to get up and slow it down, WP Nel was penalised for a torpedo style tackle on the legs of Horie.

Yu Tamura pointed at the posts as the ground fell silent but missed.

18 minutes saw Japan back in the game,  Fukuoka received a miss pass from Lafaele on the left touchline, he gassed up the line and got away with  an outrageous one-handed offload inside to Matsushima as he was hooked by Harris

Tamura added the conversion to level the score 7 points each.

26 mins saw Horie carry the ball hard into contact and offloaded the ball to Labuschagne who found his pack pal Inagaki out of the tackle to ground it under the posts. Tamura converted and Japan took the lead 14-7.

Japan were on fire whilst Scotland were struggling to structure their defence against the constant attacks.

Japan missed a penalty on 38 minutes but just after 2 minutes later  Japan worked it left in midfield to Lafaele who dinked a beautiful little grubber-chip through for Fukuoka to gather and score around the covering Hogg.

Tamura slotted the extras as the teams went in for half time 21 -7 with Scotland looking in trouble as the first half drew to a close.