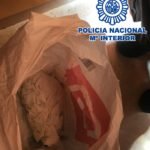 NINE people have been arrested after four drugs sales points were shut down by National Police.

The officers seized a carbine and a hand gun, 38 cartridges, 49 cocaine wraps and two bags of heroin during the operation, as well as drugs paraphernalia.

The investigation began when agents detected a daily and constant stream of people who visited a block of houses in the La Trinidad neighbourhood of Malaga, apparently to buy drugs.

There, in some cases, they stayed inside until, police say, they had used the drugs bought. During the police operation the agents made several drug seizures from different buyers, to find out what was being sold. They managed to do this discretely without alerting the dealers.

The investigators found that the drugs were being sold by members of the same family, which led them to three more premises.

arrests. They are still looking for the two alleged ring leaders of the gang.