A GROUP of youths have been captured on CCTV brawling with waiters of a popular restaurant in Spain.

The Salamanca restaurant in the heart of Barcelona’s Barceloneta area was the scene of a fierce brawl in the early hours of this morning (Friday).

The fist fight, reportedly started by a group of ‘well-known’ petty criminals in the area, descended into the use of various weapons.

Members of the Salamanca restaurant staff allege that a member of the gang had stolen a bag of possessions belonging to one of the waiters involved in the brawl.

Spanish media report that the bag was taken while the group of youths approached restaurant staff asking for food.

As seen in the footage, after a short conversation between a waiter and a youth, the young man swings a punch at the Salamanca restaurant employee, sending him stumbling backwards.

The waiter’s colleagues then spring to his defence sparking a violent brawl.

The fight saw a number of blows traded and at one point a chair is hurled at one of the youths.

The group of youths then flee as police sirens are heard arriving to the scene.

Managers at the Salamanca restaurant have told the Spanish press they have no intention to file a complaint to the police against the youths.

As of yet there have been no arrests made related to the incident and it is thought nobody was seriously hurt following the brawl.

The Salamanca restaurant is hugely popular with tourists visiting Barcelona with online reviews on TripAdvisor hailing the seafood eatery as “an institution.” 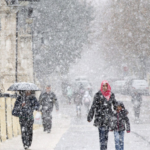 Motoring
DGT suggestions for safer driving in snowy conditions With the DANA bringing extreme cold and snow to parts of Spain, the General Directorate of Traffic...