THE family of a Scottish woman, Kirsty Maxwell, who fell from a tenth-floor balcony in Spain a year ago have thanked the public for their response and messages of support after the BBC aired a documentary.

The 27-year-old from West Lothian, was on a hen party with friends in Benidorm when she plunged to her death on April 29.

Following Monday night’s BBC Scotland “Killed Abroad” TV documentary the family said, “We have been overwhelmed by the massive amount of encouraging heartfelt social media posts, emails and text messages from so many genuine caring people offering their support, their theories about what may have happened and anything they can do to help us find out the truth.

“Thanks to everyone it means so much to us.

“The very sad and powerful documentary, Killed Abroad, has now brought into the public domain the various issues which feature and the reasons why we as a family continue to push for answers and progress regarding so many issues.

However, they went on to say, “On the back of ‘Killed Abroad’ being broadcast and the resultant increase in the public awareness of Kirsty’s case, we had hoped that the media would focus on the various important appeal points we uploaded to social media on Tuesday morning.

“Sadly that has not happened.

“The last few days of reporting in some of the UK nationals in the main has not been helpful, indeed it has been very upsetting for us as a family.

The family said, “Please help us push for answers and share and publish the information and appeal points which are on our various social media sites.”

If you haven’t watched “Killed Abroad”, you can see it on BBC iPlayer https://www.bbc.co.uk/programmes/b0bb7md5

It is known Kirsty had been with friends before she apparently left them for a different hotel room occupied by five men she did not know.

The men, all from Nottingham, have given statements to Spanish police, but Mrs Maxwell’s family claim they ‘can’t grieve’ because they say the men’s stories do not add up.

Speaking as part of the documentary Killed Abroad, her mother Denise Curry said that all they have asked for is for the men to tell them what happened in the hotel room.

She said she “would like answers from them because Kirsty has no voice.”

Kirtsy’s husband Adam, who she married just six months before her death, has said that the circumstances surrounding it were “impossible to believe” and that they still are.

Joseph Graham, Callum Northridge, Ricky Gammon, Anthony Holehouse and Daniel Bailey were part of a group of 50 men on holiday together at the time of Mrs Maxwell’s death.

In a previous statement, four of the men said the incident was a ‘tragic accident’ and argued their names had been ‘dragged through the mud’.

But Mrs Maxwell’s family believe the other 45 people may have answers, too.

Mrs Curry believes the clues to what happened lie in Benidorm and Nottingham.

The programme looked at whether Mrs Maxwell climbed over the balcony, as opposed to being pushed.

Investigator Michael Brown, who recreated the young woman’s death for the documentary in July, claimed she ‘climbed out on a balcony before losing her grip and falling.’

The reasons behind why she would have done so in the first place and how she lost her grip and balance are unknown. 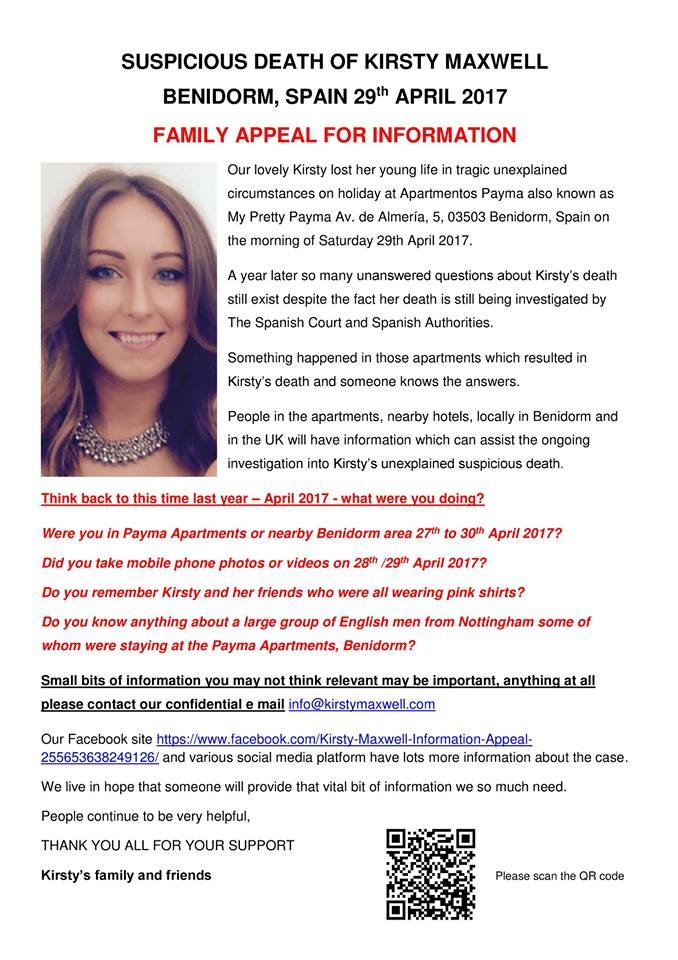