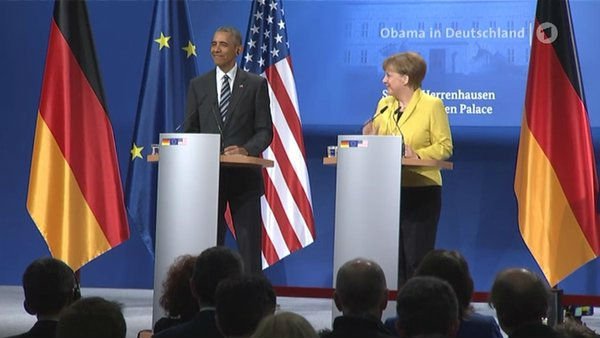 AFTER a whirlwind tour of England that included tea with the queen, golf with Prime Minister David Cameron, and a lot of intense Brexit discussions, the American president has moved on to Germany, where he will discuss pressing political matters while making several high-profile public appearances.

Earlier today (on Sunday April 24), German Chancellor Angela Merkel received Obama at the stunning Herrenhausen Palace, which is a rebuilt version of the home where the royal house of Hannover used to while away their summer days. The palace was originally obliterated during the Second World War before being reopened to much fanfare in 2013.

The two leaders exchanged pleasantries before heading into the palace to chat. They are also scheduled to hold a joint news conference in the evening, after which they will open the city’s industrial fair, a hugely important annual event which just happens to have the United States as its featured country this year.

Obama’s trip to Germany largely revolves around a proposed trans-Atlantic trade pact, although other issues such as the war on Daesh and the Syrian refugee crisis will also receive attention.

Obama is expected to plead his case for the Trans-Atlantic Trade and Investment Partnership or T-Tip over the course of his two day visit to the country which is so often seen as the economic motor and driving force behind the European continent.