Following the example of Benedict Cumberbatch and his fiancée Sophie Hunter, Geri placed an announcement in The Times newspaper.

It was rumoured earlier this year that the 42-year-old and her partner would tie the knot as they officially announced their relationship just eight months ago in March, although they have been friends since 2009. They were pictured together at several Formula One races last year including Silverstone and Monaco.

Although the redhead doesn’t have the best track record of romances after several failed relationships with celebrities including singer Robbie Williams, comedian Russell Brand, Italian millionaire Fabrizio Politi, to whom she was first engaged, and her eight-year-old daughter Bluebell Madonna’s father, screenwriter Sacha Gervasi, she is hoping that Horner is Mr Right.

Both Geri and her fiancé have children from other relationships as he recently split with long- term partner Beverley Allen, with whom he has a one-year-old daughter.

MailOnline spoke to a representative of Geri’s who said: “Everyone is really pleased for them and wish them happiness and good health together for many, many years to come.” 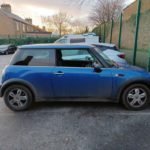 Nottinghamshire man drove for 70 years with no licence or insurance

News
Officers in Nottinghamshire pulled over a driver only to find he had no licence and no insurance, the 83 year old man claiming he...