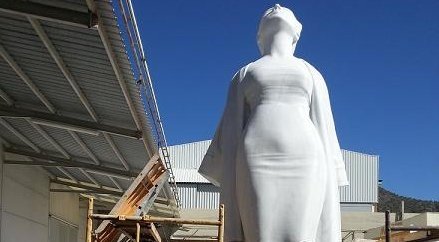 THE town of Fines in Almeria will soon witness the unveiling of the world’s biggest single-piece marble sculpture, commissioned as a memorial to victims of domestic violence.

Mayor of Fines, Rodrigo Sánchez, paid a visit to the workshop where the monument which will be dedicated to the victims of domestic violence is currently being sculpted.

It is believed that Ana Mato, the government’s Minister for Health, will unveil the sculpture at an inauguration ceremony due to be held on November 8.

The artwork will be placed at the entrance of the town at a vantage point which is to be named after Rosa Galera, resident of the town who fell victim to domestic violence at the hands of her ex-husband three years ago. It will depict a four-and-a-half-metre-high figure of a woman named Libertad (freedom).

As well as honouring the memory of Rosa, the statue will stand as a monument to every woman who has suffered domestic abuse at the hands of those they should feel safest with.

The piece is being sculpted by artist Roberto Manzano, who is currently working on the finishing touches, and takes its inspiration from the design of Andrés García Ibáñez.

It shows a woman face on with her arms extended and her palms upwards. The head is raised skyward as though in ascension, and seems to replicate the pose of the figurehead on a ship.