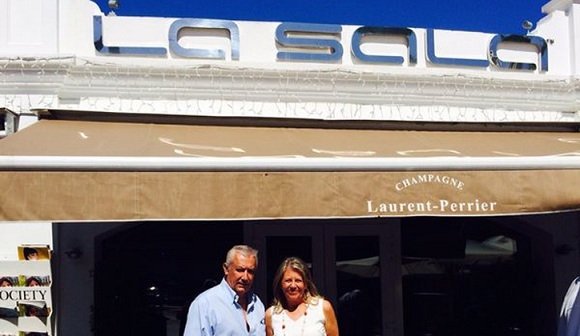 Marbella’s illustrious Mayor, Maria Angeles Muñoz graced La Sala Banús with her presence on Saturday 19th July when the resort’s first lady enjoyed lunch on the terrace with Javier Arenas, the well-known Spanish politician, currently National Vice Secretary for territorial affairs for the Partido Popular, and formerly President of the party in Andalucía from 2004-2012.

In the middle of a promotional campaign to create awareness among the population of residential tourists in Marbella about the advantages of registering at the Town Hall, the Mayor was campaigning from a large mobile office stationed opposite La Sala Banús at the entrance to the bustling Saturday market. The Town Hall are aiming to increase the number of people officially registered as resident in Marbella from 145,000 to 150,000 over the summer months and are outlining the benefits in terms of increased funding for Marbella from central government which translates to better services for the resort.

At La Sala Banús, the Mayor, Mr. Arenas and a group of friends sampled an appetising array of La Sala signature dishes including Calamari, Mini Hamburgers, Duck Spring Rolls, Butterfly Shrimps and Pasta Vongole. The Mayor’s party enjoyed lunch on the terrace, one of eight available areas for dining at La Sala Banús.