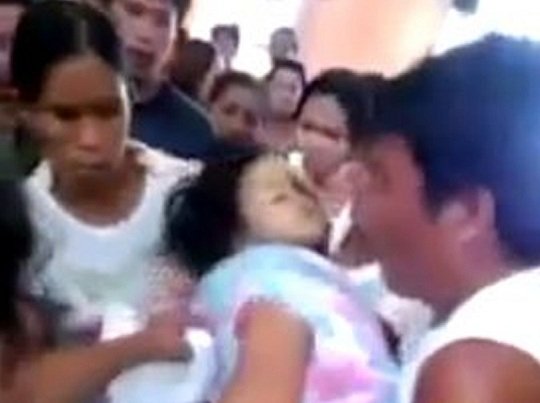 The girl, who woke up at her own funeral in the Philippines, has now died. Doctors couldn’t save the girl and she died in hospital on Monday, according to reports.

Doctors reportedly used a cardiac monitor to assess her state but there were ‘no signs of life.’

An amazing video has gone viral that captures the moment the toddler woke up at her own funeral in the Philippines.

A neighbour of the family noticed the child moving her head in the coffin after he took off the lid to arrange her body before burial.

After he finally realised she was breathing again, her father lifted her out of the coffin and rushed her to hospital. Sadly, the child fell ill again and could not survive.

She had been declared dead on Saturday after suffering from a fever for a couple of days.

Inspector Heidil Teelan explained at the time to the Philippines Star that “the attending clinic personnel and physician confirmed that the young patient had no pulse and was clinically dead last Saturday morning about 9am.”

He added that “We really cannot make confirmation on the status of the girl, but based on the observation of the police personnel I deployed it appeared the girl remained in a state of comatose in their house.”

News
A Tuesday night fire in a nursing home in Moncada, Valencia, has left five dead and 11 injured. Three of those injured are believed...