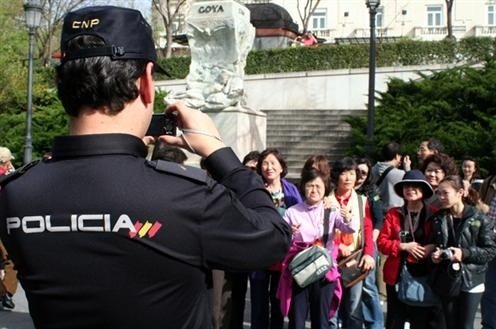 The Director General of the Spanish National Police met this week with major figures in public and private institutions tied to the tourism sector. The function was held in Granada.The aim of the meeting was to discuss and debate the new ‘Safe Tourism’ plan that has been launched for the summer high season.

The plan involves around 11,800 officers from Citizen Safety units of the Spanish National Police Force being stationed in tourist locations across the country. These hotspots include Andalucia, Asturias, the Canary Islands, Cantabria, Galicia, Madrid, Murcia and the region of Valencia. The operation will last until August 31, but will be extended until September 30 for the Balearic Islands.

The goal of the operation is to increase safety for tourists and make them feel safer too. Police officers will mainly be stationed in city centres, airports, train stations and ports. Two hundred and fifty thousand safety leaflets will be distributed along with 5,000 safety posters that will be displayed in hotels and other tourism facilities.

The police also aim to have permanent contact with industries involved in the tourism sector such as hotels and catering companies for feedback, tip offs and advice.

Spain is considered one of the safest travel destinations in the world and when you consider that 60 million tourists chose to visit the country last year, you can see why the police want to keep it this way.