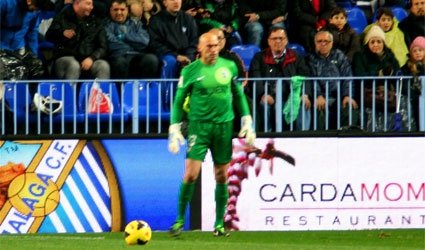 Last game of MALAGA CF got off to an intense start, with Valencia piling the pressure on Málaga from kick off.  Far from being intimidated, Schuster’s men showed off their skills with a good display between Tissone, Samu and Roque, resulting in a shot at target for the latter within the first minute of play.

Flávio was in the starting-11 tonight and new signing Pablo Pérez started on the bench, following the arrival of his international transfer just before the match got underway against Juan Antonio Pizzi’s Valencia.

Three minutes into play and the Blue and Whites created another promising chance to open the scoring.  Impressive play between Eliseu and Antunes set up another shot for Roque, however it was intercepted by Diego Alves.  Roque tried again after regaining possession, but still didn’t find the net.

Valencia didn’t cause any real danger until the 12th minute when following a goal kick, Jonas passed to Piatti, who attempted to curl the ball into the back of the net past Willy Caballero, but the ball hit the post.

The ‘Malaguistas’ had another shot at glory in minute 18, this time from a set piece.  A Duda free kick aiming to the right of the Blue and Whites’ attack led to a good save by Alves, as the ball narrowly missed the target.

Thirty minutes into play saw a double intervention by Caballero.  Firstly a powerful shot from in front of the penalty area by Parejo was close to putting Valencia in the lead, followed by another chance for Jonas who put the Málaga keeper to the test, but the visitors failed to get a goal.

Santa Cruz came close to putting the Blue and Whites on the scoreboard in minute 32.  A cross from Antunes from behind allowed Roque to again try his luck, but the ball missed the Valencia CF goal.

At half time the score was 0-0, even though Málaga CF had more chances to score than the visitors.  The rain got heavier as play went on, resulting in a massive downpour at the end of the first 45 minutes.

Málaga CF kicked off the second half in much the same way as the first; taking control of play and with a strong determination to score.  Pizzi’s team reacted positively and moved well with the ball around Willy’s goal area.  A pass from Jonas to Parejo, who was unmarked in front of the Málaga keeper, resulted in him being hit in the face with the ball and in a state of shock for several minutes.  However this was the best chance for Valencia up to now.  Caballero again saved another shot from Jonas seconds later.

Following a number of non-stop attacks by Málaga, the visitors came close to being a goal up in minute 59.  A Valencia backlash allowed Jonas to fire a shot at the target, but he curled the ball too far, missing Caballero’s goal area.

Schuster made his first substitution of the evening in the 65th minute, brining on Pablo Pérez in place of Samu, situated on the right wing.

Santa Cruz gained possession in the rival goal area, but his formidable shot was saved by Alves yet again.  In minute 67 a Valencia goal was disallowed by the referee due to a foul.

The visitors were much more active on the attack in the second half, creating more goal opportunities and really testing the strength of the Málaga defence.

In minute 75, Pablo Pérez came close to his first Blue and Whites’ goal, following a good ball from Camacho, but a perfect save by Dani Alves put paid to Málaga’s hopes.  Schuster decided to step up the Blue and Whites’ attack, bringing on Juanmi and Portillo, in place of Eliseu and Duda respectively.

Málaga CF concentrated their efforts around the rival goal area during the final 10 minutes, but didn’t create any clear scoring opportunities.  The teams shared the points tonight as they kicked off the second half of the League competition. Málaga are away to FC Barcelona next weekend.

INFORMATION:  20th BBVA League game of the season, the first of the second round, held at La Rosaleda stadium.