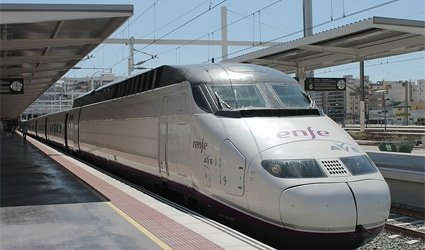 RESIDENTS in Alicante city’s Calle Bono Guarner are victims of the AVE’s success.

The Alicante-Madrid high speed train service has won praise and passengers since last June, even stealing custom from Iberia.

Nonetheless, the AVE is less popular with those who have to live beside it.

Life is no longer the same in Calle Bono Guarner, say residents who soon discovered that noise from the new station encroached on their daily lives and disturbed their sleep.

Following a rash of complaints, the track and infrastructure operator ADIF promised to reduce noise levels.


Arrivals and departures announcements have been suppressed at night, but the racket produced by the compressors used for cleaning the trains continues, residents said.  Decibel levels still exceed the legally-permitted limit, they claimed.

A “noise map” is being prepared and firms working the station have been asked minimise noise pollution.  “But where is the roof to muffle the sound promised by the Public Works ministry?” Calle Bono Guarner residents asked.