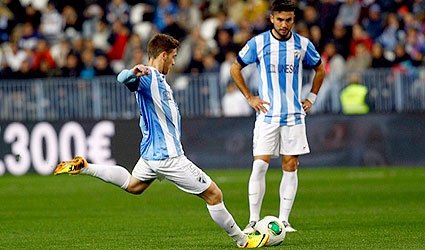 Málaga CF will face the return leg decider of the Copa del Rey at the Reyno de Navarra stadium, following tonight’s 3-3 draw against Club Atlético Osasuna. Bernd Schuster’s men were 3-0 up at the start of the second half, with the rival equalising and both teams having a man sent off. The return leg takes place on 17th December.

Málaga CF was full of excitement for this Cup game, taking the initiative at the start of the match against Club Atlético Osasuna.  The rival struggled to stop the Blue and Whites’ attack, and within the first six minutes, Javier Gracia’s team had seen two yellow cards.

Osasuna came close to the goal area in minute 12; Armenteros gained possession following a pass from the right wing but the ball hit the far post.  Bernd Schuster’s men began to have more presence around Riesgo’s area, with opportunities for Juanmi and Camacho in the first 15 minutes of play.  Four minutes later Omwu tried to surprise Willy with a long shot, but failed to find the target.

Despite not causing too much trouble in the rival goal area, Málaga CF maintained control of the ball, just leaving the rival relying on counter-attacks, that didn’t cause any upset for Willy.

The Blue and Whites were about to reap the rewards for their hard work and dominance of the match, from a set piece.  A Pedro Morales corner from the left assisted Sergio Sánchez in launching the ball into the back of the net with a powerful header, leaving Riesgo helpless in his tracks.  Málaga were 1-0 up and showing a great capacity of play on this cold December night.

Schuster’s men maintained control of the match following their initial goal, creating numerous chances to get goal number two.  Minutes later, another set piece led to another ‘Malaguista’ goal.  A foul on Sergio Sánchez by Armenteros led to a Málaga free kick.  Antunes propelled a strong shot from outside the goal area into the back of the net, leaving Osasuna 2-0 down.  The Blue and Whites appeared unstoppable and had great success from set pieces in the first half.  At half-time the locals were in the lead by two goals to nil.

The second half could not have started better for Málaga CF.  Two minutes in, and Juanmi gained possession from Tissone, and despite a foul by the rival defence inside the penalty area, he scored goal number three for the ‘Malaguistas’ at La Rosaleda.  Schuster’s team continued with the same dominance of play as shown in the first half.

However things didn’t stay as rosy for Málaga CF.  In the 58th minute following a poor decision by the Blue and Whites, Roberto Torres tried his luck with a long shot that resulted in an impossible save for Willy.  Osasuna were now back in the game.

The bad news got worse.  Osasuna scored another goal, beginning with play on the right wing from Roberto Torres, who passed to Omwu to get the glory for the visitors.  In minute 63, following a foul on Tissone, Loe was awarded his second yellow card and sent off by Gil Manzano.  The visitors came close to equalising only minutes later following another impressive display by Omwu, ending with a shot from Loties that missed the target by a whisker.

The ‘Malaguistas’ tried to regain control of the match, having the advantage of one more man on the pitch than their rival.  A good pass from Portillo in the 73rd minute assisted Juanmi in his quest for a goal.  Schuster tried a change of tactics with a double substitution, which saw Duda and Anderson join the game.

However Osasuna managed to equalise with just 10 men.  Armenteros outwitted Willy after gaining possession from a Caballero kick, putting the score board at 3-3.

With nine minutes to go until the final whistle, Bobley Anderson launched a powerful shot from the front of Riesgo’s goal area, resulting in two saves from the rival keeper.  Málaga now also had just 10 men, as Camacho was sent off, and Portillo put Riesgo to the test again, but luck wasn’t on his side.  Juanmi also failed to find the net following a pass from Gámez, as the ball collided with the near post.  The clearest goal chance of the game came in the 88th minute as Juanmi got the ball and fired towards Riesgo’s net, which by rights, should have put the Blue and Whites 4-3 in the lead.  Málaga had another few opportunities before the final whistle, but a 3-3 draw leaves Bernd Schuster’s men deciding their Copa del Rey future in the return leg, with an away goals disadvantage.