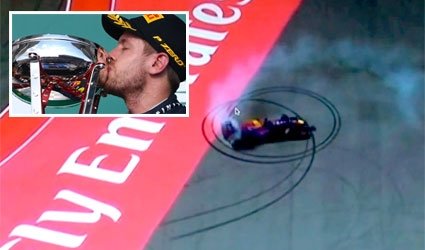 THERE is no stopping him. Sebastian Vettel took a record eight successive victories in one season at the US Grand Prix, with no one else ever looking like getting closet o his Red Bull.

The four times world champion, still only 26 and with 38 F1 race victories to his name, is now looking to equal Alberto Ascari’s record of nine consecutive wins set over two seasons – 1952 and 1953.

In a dominating performance Vettel started in pole, hit the first corner in the lead , and never looked back.

The win gives Vettel a chance to equal two records at the season’s closing race in Brazil. Not only can he tie Ascari’s winning sequence, he can also join his hero Michael Schumacher for most wins in a season – 13.