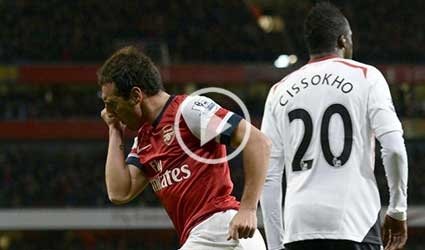 LONDON (Reuters) – Arsenal maintained their challenge for a first trophy in nine seasons when they beat Liverpool 2-0 to open up a five-point lead at the top of the Premier League on Saturday.

A brilliantly-taken opener from Santi Cazorla, who smacked in a rebound after 19 minutes, and an even better goal from Aaron Ramsey, a swerving shot with the outside of his right boot after 59 minutes, took Arsenal to 25 points from 10 matches.

Chelsea, who lost 2-0 at Newcastle United after winning their previous six games in all competitions, are second, level on 20 points with third-placed Liverpool.

Manchester City, who dropped England keeper Joe Hart, moved up to fourth with a 7-0 thumping of Norwich City while champions Manchester United stay eighth after a 3-1 win at Fulham with their goals coming in a 13-minute spell early in the first half.