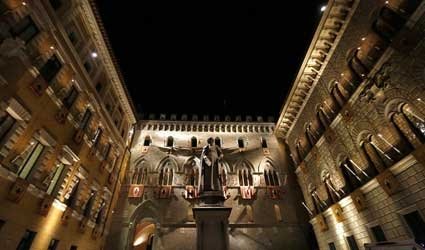 MILAN (Reuters) – With Italy mired in its longest recession since the Second World War, the country’s hard-pressed banks are cutting jobs, closing branches and infuriating unions, but the cuts are far too modest to achieve the profitability gains they need.

So far, lenders including Banca Monte dei Paschi di Siena <BMPS.MI>, IntesaSanpaolo <ISP.MI> and UBI Banca <UBI.MI> have announced that they will close or merge nearly 3,000 branches and cull 19,000 jobs by 2015, prompting unions to call on Thursday the first national bank strike in 13 years.

But the cuts represent a retrenchment of less than 10 percent in the branch network and roughly 6 percent of staff numbers based on employment levels at the end of 2011, small change in a sector offering some of the weakest investor returns in European banking.

“To regain a satisfactory profitability, the Italian banking system should cut its branch network by at least 30 percent and rationalise costs, personnel and size at remaining offices,” said Roberta Berlinghieri, a partner at Bain & Company in Italy.

Even with the current plans, Italy’s operating costs are too much of a burden in a sector that barely offered any return on equity last year, analysts said, compared with a 7.97 percent return for the top 30 European banks in the first half of this year, according to figures compiled by Reuters.

With banks under pressure to shore up their balance sheets in the face of rising bad debts and Europe-wide stress tests next year, the country’s central bank this week called for more action on costs.

“In order to regain profitability in the short-term, banks must decisively act on costs, including labour costs that currently represent more than half of overall costs,” Bank of Italy governor Ignazio Visco said this week.

“The traditional retail network must be rethought, with a focus on the offering of more complex products.”