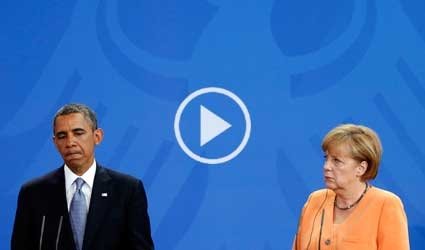 BERLIN (Reuters) – Angela Merkel’s top foreign affairs and intelligence advisers will quiz officials in Washington on Wednesday over the activities of U.S. spies in Germany, including allegations they tapped the German chancellor’s phone.

The visit is one of a series of trips by high-ranking German and European Union officials to the United States this week after revelations of the scale of the surveillance triggered outrage and shattered European trust in Washington.

Merkel wants the United States to agree a “no spying” deal with Berlin and Paris by the end of the year and to stop alleged espionage against two of Washington’s closest EU allies.

“I can confirm that the two top aides from the chancellery are in Washington for talks today,” said her spokesman Steffen Seibert. “As you see we are in a process of intense contact with our U.S. partners on the intelligence and political levels, and this process of contact and investigation will take more time.”

“The talks aim to set up a new foundation for trust,” he told a news conference.

The White House did not deny reports that the National Security Agency (NSA) had monitored Merkel’s phone but said no such surveillance was taking place now.

Later this week the heads of Germany’s domestic and foreign intelligence agencies will also travel to Washington.

European lawmaker Elmar Brok, a German national, told German daily Bild that his meeting with the U.S. officials produced no breakthroughs but did generate good signals.

“Our talks showed that the Americans recognise the immense political damage caused by this affair and are open to more transparency,” he said.

The U.S. Congress is weighing new legislative proposals that could limit some of the NSA’s more expansive electronic intelligence collection programs.