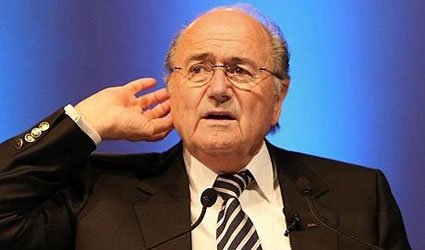 Blatter was asked at the Oxford University Union on Friday to give his opinion of Ronaldo and Barcelona’s World Player of the Year Lionel Messi.

Ronaldo, 28, was the last player other than Messi to win the World Player award in 2008 before the 26-year-old Argentine won four in a row.

Blatter said they were both exceptional players but added that, unlike Messi, Ronaldo resembled “a commander on the field of play”. He then rose from his chair and strutted on the stage in military fashion in apparent imitation of the Portuguese.

“One (Ronaldo) has more expenses for the hairdresser than the other but that doesn’t matter,” he added, drawing a laugh from the audience of mainly students.

“I cannot say who is the best, there will be again a contest this year. I like both of them but I prefer Messi.”

Ancelotti told a news conference previewing Wednesday’s La Liga game at home to Sevilla that Real president Florentino Perez had written to FIFA asking them to rectify the comments, which he said showed “a lack of respect to a very serious and very professional player”.

“I am completely in agreement with my president,” added the Italian. “I haven’t spoken to Cristiano Ronaldo about it. He trained very well today, as always.

“He is showing every day that he is a great player and that he respects everyone.”