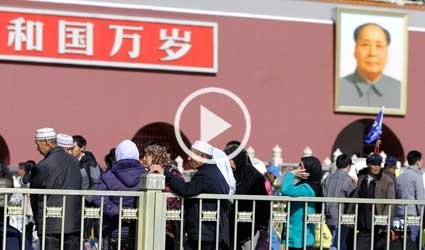 BEIJING (Reuters) – Chinese authorities suspect suicide attackers drove the vehicle that ploughed into pedestrians at Beijing’s Tiananmen Square and set it on fire, killing five people including the three inside, sources told Reuters on Tuesday.

At least 38 people were injured in Monday’s incident at Tiananmen, part of the closely guarded heart of the Chinese government, but there has been no official word whether it was an accident or an attack.

Authorities suspect the incident was an attack just ahead of November’s key conclave of the ruling Communist Party’s elite 205-member Central Committee at which major economic reforms are expected to be announced, a source with direct knowledge of the case and a source with ties to the leadership told Reuters.

“It looks like a premeditated suicide attack,” the source with direct knowledge of the matter told Reuters, speaking on condition of anonymity to avoid repercussions for talking to the foreign media.

Police are still investigating and have yet to determine the identities of the three people in the vehicle, according to the sources. But Beijing police said late on Monday they were looking for two suspects from the restive far western region of Xinjiang in connection with a “major incident”.

The sources said that the men were suspected of lighting a flammable material on the vehicle.

“It was no accident. The jeep knocked down barricades and rammed into pedestrians. The three men had no plans to flee from the scene,” said the source who has ties to the leadership.

A Reuters reporter at the scene at the time said he did not heard any gunshots.

On Monday night, hours after the fire, Beijing police issued a notice asking local hotels about suspicious guests who had checked in since Oct 1 and named two suspects it said were from Xinjiang. Four hotels told Reuters they had received the notice.

Judging by their names, the suspects appeared to be ethnic Uighurs, who are Turkic-speaking Muslims from Xinjiang. Many Uighurs chafe at Chinese controls on their culture and religion.

“To prevent the suspected persons and vehicles from committing further crimes … please notify law enforcement of any discovery of clues regarding these suspects and the vehicles,” said the notice, which was widely circulated on Chinese microblogs.

Beijing police, contacted by telephone, declined to comment. On Monday, the police said on their official microblog only that they were investigating the accident, and did not say if they thought it was an attack.

Chinese Foreign Ministry spokeswoman Hua Chunying, asked whether the government believed the incident was a terror attack, declined to comment, repeating a previous statement that the incident was being investigated.

IN FRONT OF MAO’S PORTRAIT

Police said on Monday the sports utility vehicle veered off the road at the north of the square, a major tourist attraction, crossed the barriers and caught fire almost directly in front of the main entrance of the Forbidden City, in front of a huge portrait of the founder of Communist China, Mao Zedong.

Tiananmen Square was the site of huge pro-democracy protests in 1989 that were brutally crushed by Chinese authorities, and remains one of China’s most sensitive and well-guarded locations.

Pictures seen by Reuters showed that the vehicle appeared to have driven several hundred metres (feet) along the pedestrian pavement in front of the Forbidden City entrance before bursting into flames, knocking down people as it went.

One eyewitness, who asked not to be identified due to the incident’s sensitive nature, said she saw the vehicle knock down three or four people, and that it had a white banner with black lettering on it streaming from the back.

“People started to panic, and all ran to hide in the toilet,” she said. “Three or four minutes later I came out and could see black smoke, and the police had begun to clear people out.”

While censors moved quickly to remove pictures of the incident from the popular Twitter-like service Sina Weibo, as often happens in stability-obsessed China, many images and accounts are still viewable a day after the event.

The three people in the vehicle died, as well as two tourists.

Beijing police stepped up checks on cars around the city in response to the incident, one police officer at a checkpoint on the border between Beijing and Hebei province told Reuters.

China has blamed Uighur separatists and religious extremists for a series of attacks over the years in Xinjiang, saying they want to establish an independent state called East Turkestan.

However, the unrest has never before spilled over into the nation’s capital, despite speculation in 1997 that Uighurs were to blame for a Beijing bus bomb in which at least two died.

A state newspaper reported in July that the government suspected Syrian opposition forces were training extremists from Xinjiang to carry out attacks in China.

“They have been known to carry out attacks outside of Xinjiang,” said Yang Shu, a terrorism expert at China’s Lanzhou University.

“There have also been reports that East Turkestan elements have received training in Syria, so I would say the possibility does exist of a Xinjiang connection,” he added.

The Beijing police notice said that one of the suspects was from Piqan, called Shanshan in Chinese, about 250 km (150 miles) southeast of Xinjiang’s capital Urumqi, where at least 35 people died in clashes with the police in June.

China denies mistreating any of its minority groups, saying they are guaranteed wide-ranging religious and cultural freedoms.

Many rights groups say China has long overplayed the threat posed to justify its tough controls in energy-rich Xinjiang, which lies strategically on the borders of Central Asia, India and Pakistan.