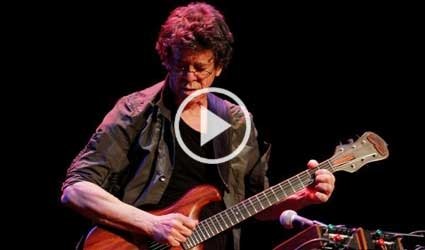 Reed, whose band fused music and art in collaboration with its early benefactor, pop artist Andy Warhol, died at the Long Island home he shared with his wife, Laurie Anderson, following complications from a liver transplant earlier this year, his literary agent Andrew Wylie said.

“I think Lou was as great an artist as it was possible to be,” Wylie said. “It’s a great loss.”

Formed by Reed and classically trained Welsh-born musician John Cale in the mid-1960s as an experiment in avant-garde rock, The Velvet Underground gained Warhol’s notice soon after hitting the New York club scene.

While the band never achieved great commercial success, it revolutionized rock in the 1960s and ’70s with a mixture of thrashing guitar licks and smooth melodies sung by Reed or the German model Nico.

The Velvet Underground has long been recognized as a major musical inspiration for punk art and rock, as reflected in a quote often attributed to musician Brian Eno: “The first Velvet Underground album only sold 10,000 copies, but everyone who bought it formed a band.”

Neil Portnow, president the National Academy of Recording Arts and Sciences, which bestows the Grammys, credited Reed with “introducing avant-garde rock to the mainstream.”

“His uniquely stripped-down style of guitar playing and poetic lyrics have had a massive influence across many rock genres, including punk and alternatives,” Portnow said.

Fellow avant-garde rocker David Bowie, who helped produce Reed’s second solo album and is often cited as one of his greatest musical heirs, posted a picture of the two recording stars together on his Facebook page, saying of his old friend: “He was a master.”

Cale, who played bass, organ and viola in the Velvets and had an often-fractious relationship with Reed, said on his Facebook page: “The world has lost a fine songwriter and poet … I’ve lost my ‘school-yard buddy,'” he said.

Reed and Cale put aside their differences to release a tribute album to Warhol in 1990 called “Songs for Drella.” That album led to a handful of reunion performances by members of The Velvet Underground’s original line-up – rounded out by guitarist Sterling Morrison and drummer Maureen Tucker – in the early 1990s.

An admitted hard drinker and drug user for many years, Reed underwent a liver transplant earlier this year in Cleveland, his wife revealed, after he had cancelled a series of California concert dates in April.

“I am a triumph of modern medicine,” Reed posted on his website on June 1, 2013, without directly acknowledging the transplant. “I look forward to being on stage performing, and writing more songs to connect with your hearts and spirits and the universe well into the future.”

Reed has been widely credited with expanding the lexicon of rock ‘n’ roll with provocative lyrics that chronicled androgyny, illicit sex, and drug abuse, notably in the song “Heroin,” in which he declares, “It’s my wife, and it’s my life.”

“Walk on the Wild Side,” a catchy tune from his second solo album, “Transformer,” co-produced by Bowie, became Reed’s only top-20 hit single, though it contained lyrical references to transexuality, drugs and male prostitution.

“I never in a million years thought people would be outraged by what I was doing,” Reed said in a 1989 interview with Rolling Stone magazine. “You could go to your neighbourhood bookstore and get any of that.”

One of his signature songs, first performed by The Velvet Underground and later a staple of his solo act, was simply titled “Rock and Roll,” a semi-autobiographical story of how music saved the life of a young fan listening on the radio.

His stage persona, often appearing in a dog collar and eye makeup, opened the door for Bowie and other artists to take sexually ambivalent styles into the mainstream.

It was personified in the landmark live album “Rock N Roll Animal,” released in 1974. That record closely followed the studio-record rock opera album “Berlin,” which he brought to life again with a 2006 concert that was made into a 2007 film directed by Julian Schnabel.

Inducted into the Rock and Roll Hall of Fame in 1996 as a member of The Velvet Underground, Reed grew into something of an elder statesman of rock, a towering figure in a club with fellow legends such as Bob Dylan and Neil Young.

Reed always placed great importance on song-writing. One of his first jobs out of college was as a staff writer for Pickwick Records. He dedicated the 1966 song “European Son” to the late poet, Delmore Schwartz, under whom he studied at Syracuse University.

Reed was married three times, the latest to recording and performance artist Laurie Anderson in 2008, and in recent years took an interest in photography, staging exhibitions of his work.