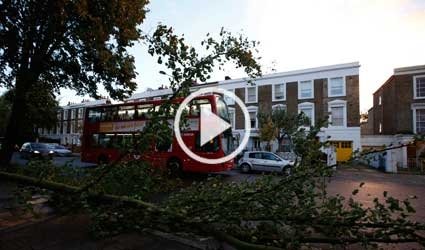 Winds of up to 99 miles per hour (160 km per hour) lashed southern England and Wales in the early hours of Monday, shutting down rail services in some areas during rush hour.

Storms were are also expected to hit parts of the Netherlands later on Monday, the Dutch Meteorological Institute said, and Schiphol airport told passengers to expect cancellations.

About 40,000 customers were left without power in one of the worst storms to hit England since the 1987 “Great Storm” which killed 18 people in Britain and felled around 15 million trees.

A 14-year old boy was missing after being swept out to sea on Sunday afternoon before the storm hit. Police said rescuers were forced to call off a search for him late on Sunday due to the pounding waves, whipped up by the rising wind.

London’s Heathrow airport said 130 flights were cancelled, the majority between 6:00 and 11:00 a.m. and told passengers to check with their airlines before travelling.

Gatwick airport warned of flight disruption, adding the train services to the airport would not run until 9:00 a.m.

As the working week began, thousands were expected to be stranded at home. London’s underground service said several lines were part suspended due to obstruction on tracks.

The Highways Agency, which operates the road network in England, said high winds had forced the closure of London’s southbound Dartford Crossing and the M4 Severn crossing, between South Wales and England, in both directions.

Network Rail, Britain’s rail network operator, said services were unlikely to get going until 9.00 a.m. in some areas.

Strong winds were forecast to continue hitting Britain’s East, East Midlands, West Midlands, South East and South West and there was a risk that motorbikes and high-sided vehicles could be blown over, the agency added.

“The thing that’s unusual about this one is that most of our storms develop out over the Atlantic so that they’ve done all their strengthening and deepening by the time they reach us,” Met Office spokeswoman Helen Chivers said.

“This one is developing as it crosses the UK, which is why it brings the potential for significant disruption … and that doesn’t happen very often.”

Met Office spokesman Dan Williams said the last such comparable storm – taking into consideration the time of year and area affected – was in October 2002.

In Britain, winds peaked at more than 110 mph when the 1987 storm hit without warning, causing millions of pounds of damage and provoking criticism of Britain’s national forecaster.