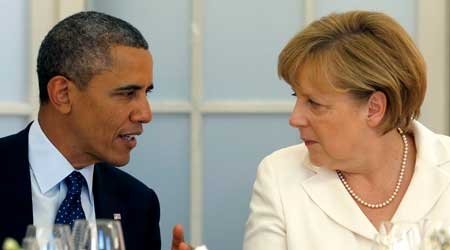 BERLIN (Reuters) – A German newspaper said on Sunday that U.S. President Barack Obama knew his intelligence service was eavesdropping on Angela Merkel as long ago as 2010, contradicting reports that he had told the German leader he did not know.

Reuters was unable to confirm Sunday’s news report. The NSA denied that Obama had been informed about the operation by the NSA chief in 2010, as reported by the German newspaper. But the agency did not comment directly on whether Obama knew about the bugging of Merkel’s phone.

Both the White House and the German government declined comment.

Citing a source in Merkel’s office, other German media have reported that Obama apologised to Merkel when she called him on Wednesday, and told her that he would have stopped the bugging happening had he known about it.

But Bild am Sonntag, citing a “U.S. intelligence worker involved in the NSA operation against Merkel”, said NSA chief General Keith Alexander informed Obama in person about it in 2010.

“Obama didn’t stop the operation back then but let it continue,” the mass-market paper quoted the source as saying.

The NSA said, however, that Alexander had never discussed any intelligence operations involving Merkel with Obama.

Bild am Sonntag said Obama in fact wanted more material on Merkel, and ordered the NSA to compile a “comprehensive dossier” on her. “Obama, according to the NSA man, did not trust Merkel and wanted to know everything about the German,” the paper said.

White House spokeswoman Caitlin Hayden declined to comment and reiterated the standard policy line that the United States gathers foreign intelligence of the type gathered by all nations.

Bild said the NSA had increased its surveillance, including the contents of Merkel’s text messages and phone calls, on Obama’s initiative and had started tapping a new, supposedly bug-proof mobile she acquired this summer, a sign the spying continued into the “recent past”.

The NSA first eavesdropped on Merkel’s predecessor Gerhard Schroeder after he refused to support President George W. Bush’s war in Iraq and was extended when Merkel took over in 2005, the paper said.

Eighteen NSA staff working in the U.S. embassy, some 800 metres (yards) from Merkel’s office, sent their findings straight to the White House, rather than to NSA headquarters, the paper said. Only Merkel’s encrypted landline in her office in the Chancellery had not been tapped, it added.

Bild said some NSA officials were becoming annoyed with the White House for creating the impression that U.S. spies had gone beyond what they had been ordered to do.