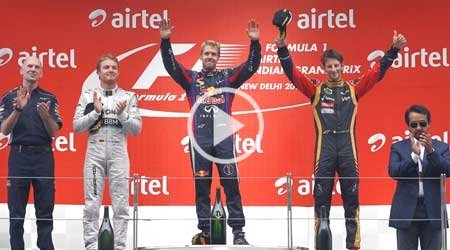 “You’ve done it in style,” Red Bull principal Christian Horner shouted over the team radio as Vettel took the chequered flag with a massive 29.8-second lead over compatriot Nico Rosberg for Mercedes.

“Brilliant drive. You join the greats, mate. You’re up there.”

The victory from pole position was Vettel’s sixth in a row and completed a hat-trick in India where no other driver has won since the race made its debut on the calendar in 2011.

Vettel becames the fourth quadruple champion and only the third driver to land four titles in a row after Germany’s seven-times winner Michael Schumacher and the late Argentine Juan Manuel Fangio.

The German celebrated by adding some tyre smoke to the haze hanging over the Buddh International circuit, slowing the car on the pit straight and then spinning it around with some ‘donuts’ for the fans.

He got out, standing up on the car before crouching to kiss the front in a gesture of worship. Throwing his gloves into the grandstand, Vettel clambered over the pitwall to embrace Horner and designer Adrian Newey.

“How do I feel? I’m overwhelmed. One of the best days of my life so far,” he said in a podium interview alongside Rosberg and third-placed Frenchman Romain Grosjean who had roared through from 17th on the grid for Lotus.

“I am speechless and I was empty when I crossed the line. I spent ages thinking what to say, there is so much you want to say at a time like that.

“It has not been an easy season. From the outside people will think it was easy but it wasn’t. It has been hard for me in particular to be booed when I have not done anything wrong,” added Vettel.

The boos that marked some of his earlier wins were absent on Sunday, with the German’s title a foregone conclusion and the crowd happy to witness history in the making.

He had led Ferrari’s Fernando Alonso, the only man who could put his celebrations on hold, by 90 points before the start with three races remaining – worth a maximum 75 – after India.

Alonso needed to finish in the top two but his hopes evaporated at the start when he tagged the rear of the Red Bull driven by Vettel’s team mate, Australian Mark Webber, and had to pit for a new front wing before rejoining the race in 20th place.

The Spaniard finished out of the points in 11th spot while Webber, who led for much of the early part of the race after starting on the longer-lasting medium tyre, retired on lap 40 with an alternator problem.

“I still have a smile on my face, there’s nothing more I could do today,” said Webber.

Ferrari’s Felipe Massa finished fourth with Mexican Sergio Perez fifth for McLaren in his best result of the year.