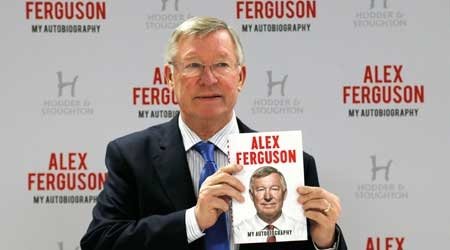 LONDON (Reuters) – Alex Ferguson could return to a job in football management despite his retirement at the end of last season, according to his old Arsenal adversary Arsene Wenger.

“In six months we will know more about that. You cannot rule it completely out,” Wenger was quoted as saying about the former Manchester United manager by British media on Friday.

“It is difficult to take a drug for 30 years and suddenly get rid of it.”

Earlier this week, Ferguson published his autobiography which included a chapter about his French rival called ‘Competing with Wenger’.

“We have gone through some years that were a bit more difficult, but honestly, in our job, it is quite simple just to think about tomorrow or the next game, and that is it. After that, people judge,” said Wenger, who celebrated his 64th birthday on Tuesday.

Wenger, now the longest-serving manager still working in the Premier League having joined the north London club in September 1996, had not yet read the autobiography but added: “It looks like Ferguson had prepared his book while he was managing.

“I suspect he had written some of it at home at night, remembering things and thinking: ‘that goes into my book!’.