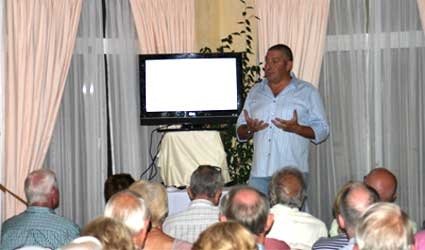 Over 100 mainly British people attended the first IPTV (Internet Televison) seminar organised by BM Promotions at the Tamisa Hotel on Thursday 24th October (edition 1476). Presentations were made by Ben Alford of Astra2.TV who talked about dedicated servers providing live and catch up TV by subscription. Kenton Smith of the Facebook group “IPTV Spain” talked about Raspberry Pi and Android media boxes and Alan Jones of the Experience Group who talked about various aspects of internet connections and TV availibility via satellite and internet.

The concept of IPTV initially seemed to be beyond many of those attending possibly due to the terminology, with most bewildered as to why it was not “Free” as the channels they wanted to watch are “Free to air”. One couple left after hearing that they would need to have an internet connection in order to get “Internet TV”, how else did they imagine they would get it?

It was clear from the many questions being asked after each presentation that the majority of ex-pats are confused by the options that are being advertised, and by the many different channel packages that are promised. The speakers were united in confirming that premium “Pay to view” channels like Sky Sports/Movies can not be legally obtained and most probably will disappear from any package advertising them.

The subject of internet connections was covered at length, both cable and WiFi, and the amount of data needed to watch TV was a surprise to most people. Data useage has probably not been much of an issue up until now, but if the expected switch off of the BBC, ITV etc “Free to air channels” happens, and people turn to IPTV for their TV, individual data usage will go up and ISPs will almost certainly invoke their “Fair use” policy governing the amount of data each user can use per month. This will result in a reduced speed and consequently affect the viewing of streaming video.

Kenton’s presentation about DIY internet TV interested quite a few people, especially those who wanted the cheapest possible option, but many felt they would not have the expertise to be able to configure computers and Raspeberries, but by doing it yourself it was clear that a huge wealth of TV was available FREE to view, albeit at the cost of an internet connection.

More seminars, in different areas of the Costa del Sol are currently being finalised and anyone wanting to attend one should contact Martyn Wood of BM Promotions for more details by email [email protected] or call 952661819 10am to 6pm weekdays.